In fear conditioning research, participants are often excluded from the final dataset for being a ‘non-learner’ or ‘outlier’. As such, participants are excluded when they do not show the ‘expected discrimination’ between the CS+ and CS-. This ‘performance-based exclusion’ of participants is typically assessed through SCRs based on a certain cutoff and is problematic for several reasons, which we discuss in detail in this manuscript.

First, one major problem is the excessive heterogeneity of ‘non-learner’ definitions [‘researcher’s degrees of freedom’  or ‘forking paths’ ] both between but also within labs. These forking paths are intriguingly illustrated by our systematic literature search (Figure Panel A) and are a concern with respect to scientific rigor, risk of false positives, replicability and comparability across studies.Second, excluding up to 75% of the sample (for details see manuscript) has to be considered problematic for scientific and moral reasons: It leads to a waste of public money and human resources  which is disproportionate and extends beyond the direct costs of the project to a complete research field being (potentially) misled.

Third, we show empirically that such performance-based exclusion reduces the sample to a very specific sub-sample of participants – for instance with respect to Trait Anxiety: The distribution of Trait anxiety scores (illustrated in the color-coded ridgeline density plots, upper panel in Figure panel B) in the samples gets shifted towards lower anxiety scores with the employment of higher-cut offs. In other words, high SCR CS+/CS- discrimination cut-offs lead to the exclusion of high anxious individuals. This is problematic with respect to generalizability of results to the general population and particularly for clinical translation.

Fourth, we have also shown that the ‘non-learner’ definitions employed in the literature fail the manipulation check as, ironically, those individuals classified as ‘non-learner’ show significant CS+/CS- discrimination in SCRs and other outcome measures in our samples.

While raising awareness to these points is an important first step, it is crucial to provide constructive, evidence-based suggestions on where to go from here. In this case, representatives from eight different European laboratories working on fear conditioning in humans have agreed on suggestions and recommendations, which are provided as checklists  and as an open editable version to be developed further by the field.

Discussion on methodological challenges in human fear conditioning research in the context of the Scientific Network has sparked disucssions on translational challenges in the field and comparability of methods and procedures employed in rodents and humans. Subsequently, we have initiated discussion with researches working on fear conditioning in different species (from the rodent field: Dr. Stephen Maren, Texas, Dr. Carsten Wotjak, MPI Munich and Dr. Kai Jüngling, Münster) and have put together an overview article on methods entitled “Making translation work: Harmonizing cross-species methodology in the behavioural neuroscience of Pavlovian fear conditioning” (Haaker et al., Neuroscience Biobehavioral Reviews, 2019).

Project 3: Reconsidering the Extinction retention index from a theoretical and empirical perspective.

Here, we (Lonsdorf, Merz & Fullana, Biological Psychiatry, 2019) provide a critical evaluation of the extinction retention index (ERI) from a conceptual and empirical perspective. Our systematic literature search and identified 16 different operationalizations (i.e., formulas) to calculate the “extinction retention index” (ERI) which show unsatisfactory correlations across four datasets – in particular across differential vs. non-differential ERIs calculations. We further demonstrate empircally that normalizing for the maximimum CS+ response during acquisition does not map onto learning processes.  We challange the ERI from a conceptual as well as theoretical perspective and discuss implications for the field. 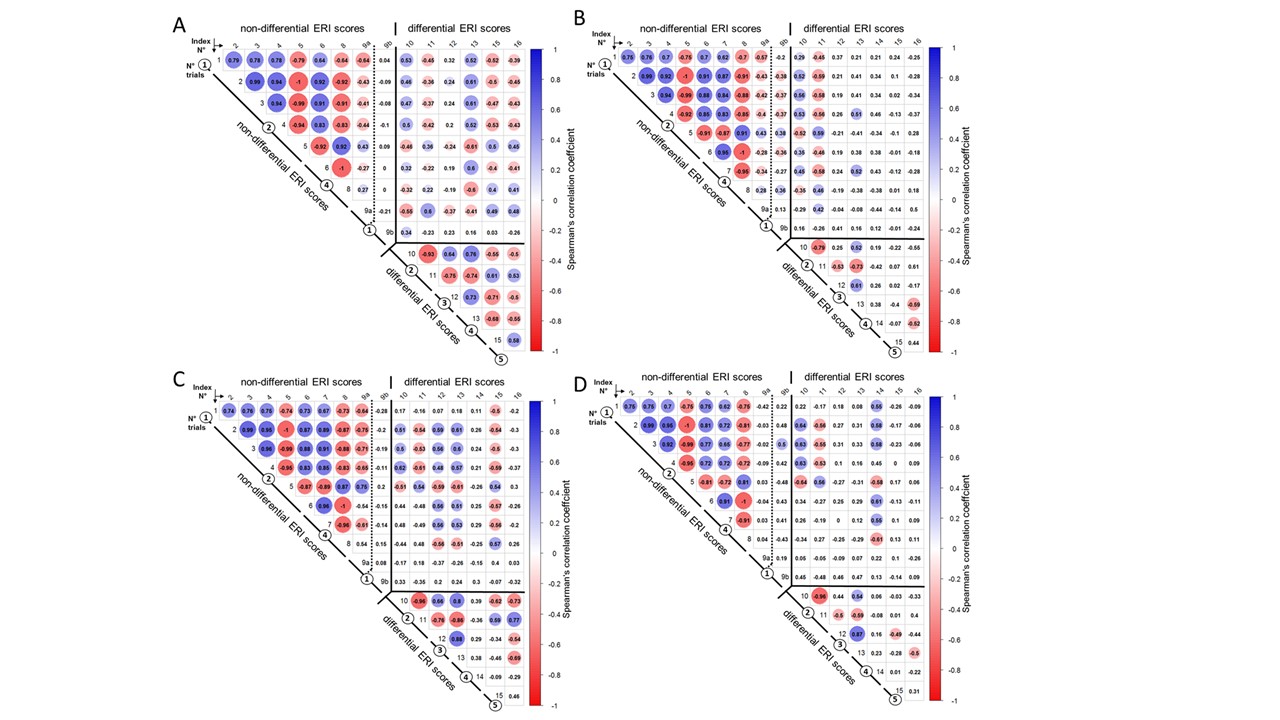 Some recomendations in the field of fear conditioning reserach have been developed in the 1970ies and not yet been re-considered with new technological developments allowing us to capture psychophysiological responses wither a higher resolution. Here, we revisit the question of different onset-latencies  across stimlus modalities (visual, tactile, auditory) and stimulus types (CS+, CS-) in a fear conditioning study, which demonstrates profound differences across modalities but not stimulus types (Sjouwerman & Lonsdorf, Psychophysiology, 2018).

The so-called ‘replicability crisis’ in psychology has sparked methodological discussions in many areas of science in general and psychology in particular. This has led to recent endeavors of the scientific community to promote the transparency, rigor and ultimately replicability of research which gave rise to the new field of “meta-research”. Originating from this zeitgeist, the challenge to discuss critical issues on terminology, design, methods, and analysis considerations in fear conditioning research has recently been taken up by the ‘Research Network for the European Interdisciplinary Study of Fear and Extinction Learning as well as the Return of Fear (EIFEL-ROF)’. A group of (young) scientists have met on a regular base since May 2015 to identify and debate on urgent open questions and important methodological considerations. This endeavor originated from and is reflective of the spirit of the annual European Meeting on Human Fear Conditioning (EMHFC).

The outcome of these fruitful discussions, a comprehensive review-type article (Lonsdorf et al., Neuroscience and Biobehavioral Reviews, 2017), is intended to provide a basis for the development of a common procedural framework for the field of human fear conditioning and provide encyclopedic guidance for methodological decisions on design and analysis is under review. Thereby, we hope to spark fruitful discussions and methodological research projects to ultimately establish a consensus in the field with respect to design and analysis considerations.

Project 6: The impact of startle probes and ratings on fear acquisition and extinction

In this empirical project, we investigated the impact of apparently subtle changes in design/methods, more precisely, the inclusion of fear ratings or the presentation of startle probes, on the process under study – fear learning (Sjouwerman et al., Psychophysiology, 2016). Inclusion of startle probes slowed down fear learning substantially while intermittendly presented ratings had a less pronounce impact.

Why do some individuals develop pathological anxiety in the aftermath of trauma while others do not? Clearly, exposure to a traumatic event is not sufficient for the development of fear- and stress- related disorders. Individuals do not only differ with respect to exposure to life adversity before, during and after trauma (experiential differences) but also differ in personality (i.e. trait variables) and/or biological factors, all of which strongly impact vulnerability to pathological anxiety or its opposite pole resilience. We have put togeether a systematic review article  on individual difference factors in fear conditioning research including methodological considerations such as different requirements with respect to design and data analysis when focusing on individual differences as comprare to average proceses (Lonsdorf & Merz, Neuroscience and Biobehavioral Reviews, 2017). 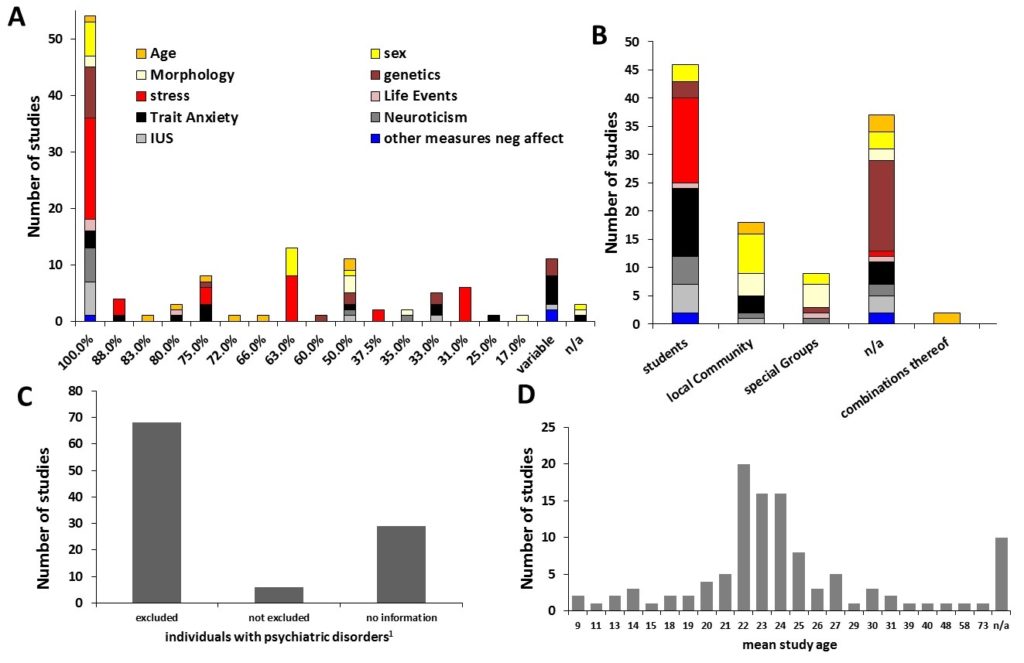